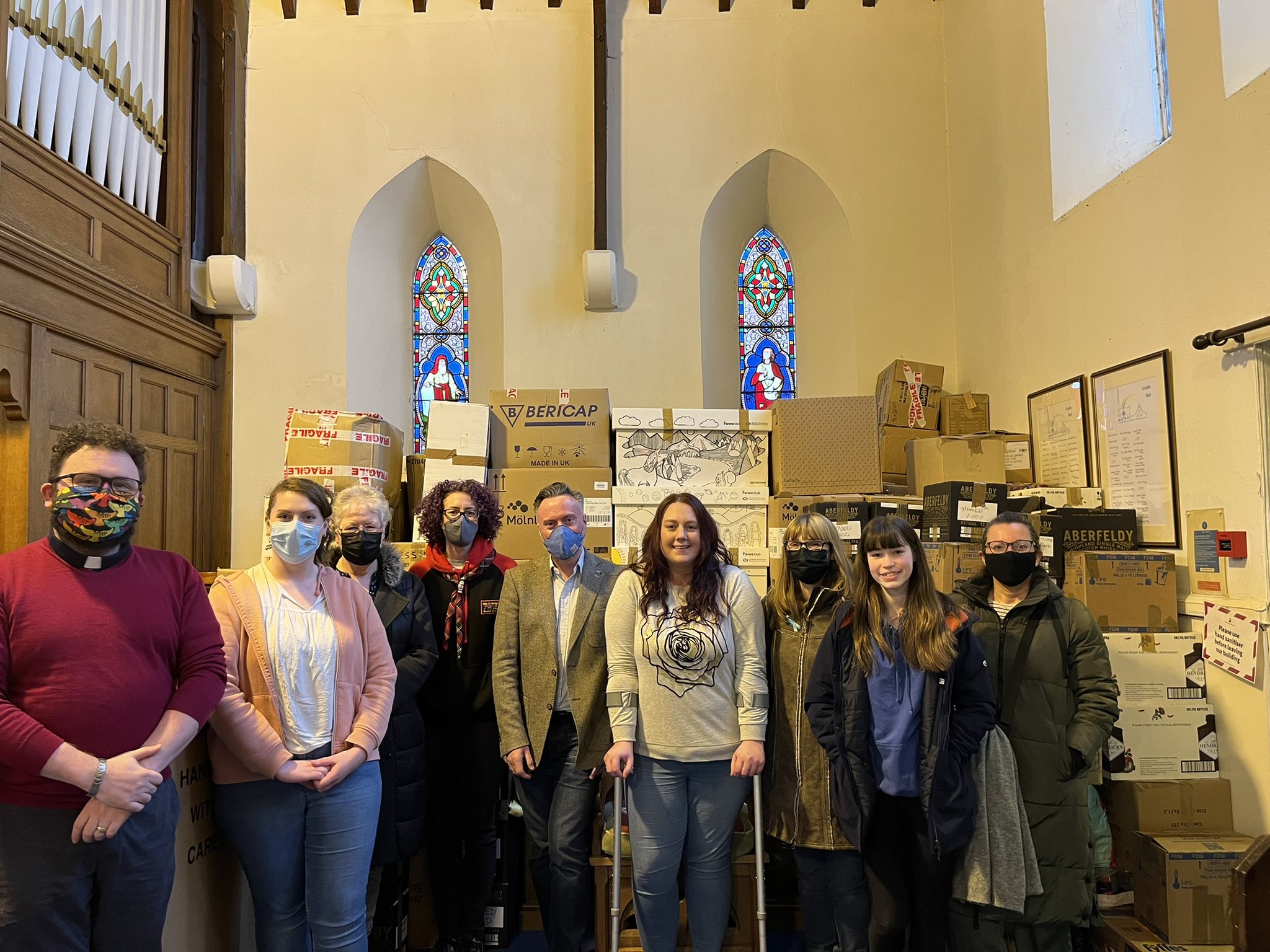 Flood of Local Donations and Volunteer

The international community has rallied around Ukraine, offering weapons, aid and diplomatic support to the besieged nation, as well as implementing devastating sanctions against Russia and Belarus. Since the beginning of Russia’s invasion of Ukraine, the UN estimates over 1.5 million displaced civilians have fled the conflict to neighbouring countries, with just over 1 million alone heading to neighbouring Poland.

Pressure is building on the UK Government from citizens and allies to do more in accepting refugees from the conflict – with some suggesting to adopt the EU’s approach of visa waivers for 3 years.

In a visit to Bridge of Allan’s Parish Church, Alyn Smith MP heard how volunteers quickly organised through various online and civic society channels to begin their important work. In just a few days, rooms and halls of the church were fit to burst as donations from businesses and individuals came in thick and fast.

‘The depth of feeling shown locally here in Stirling towards Russia’s invasion of Ukraine has been quite extraordinary. Constituents are united in their condemnation of Russian aggression, and in their solidarity with the people of Ukraine in their darkest hour.

‘The volunteers I had the pleasure of meeting spoke of a new empathy and perspective on war and conflict, one that will carry with them for the rest of their lives. They recalled the feeling of helplessness we’ve all felt as we watched a European democracy under military attack on our screens in the year 2022.

‘I’m immensely proud of the people of Stirling, for their self-organisation, and for the confirmation that we can do something about the injustices we’re faced with. Organisations like the Bridge of Allan Parish Church are so crucial to our shared sense of solidarity in situations like these – and are a key outlet in allowing people to do something to address the problems they can see in the world.’

‘The church is at the heart of the community and it is a privilege to walk alongside people who have shown such compassion and generosity to those who are suffering in Ukraine. Our congregation and members of the local community all feel the same sense of dread and fury at what we’re witnessing in Ukraine at the moment.

‘We’ve a strong sense of community and identity in Bridge of Allan, and it’s been so heartening to see us utilise it to do what we can for the people of Ukraine. Injustice can only be overcome with empathy, understanding and action, and seeing those values play out as members packed boxes of bandages and baby clothes for a war zone really brought that home.

‘We stand with the people of Ukraine, and we remain committed to using our voice, our power and our privilege to speak out against this awful war and the suffering it’s unleashed for millions.’

Attached is a picture of Alyn Smith MP with volunteers at the Bridge of Allan Parish Church, with boxes of donated goods in the background.